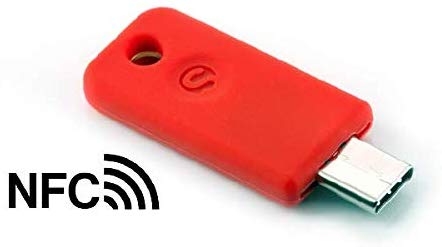 It was Christmas, I wanted to increase my IT security and I have bought a Solo Tap. It is an open source USB / NFC key, compatible with the FIDO2 protocol and used for strong authentication.

First impression, it looks fragile. Several people on the Internet say they broke their key while putting on the protection. The presence of two protections of different colors is a good plus.

Quick comparison with a YubiKey 5C

The leader on the strong authentication is the Yubikey. Unfortunately unlike the Solo Tap, it is not open source. Another big advantage of the Solo Tap is the possibility of buying a model that is both compatible with USB C and NFC, but this point could evolve in the future.

On the Yubikey, thinner, two buttons located on both sides with the same use. The Solo Tap button is on the top, more easily accessible, with a quick flash when pressed. However, if the keys are horizontal, like on a Macbook, it looks very fragile.

The Solo Key is an interesting key, due to its Open Source side and its physical characteristics (USB C + NFC). However, I have doubts about its solidity and its resistance over time.